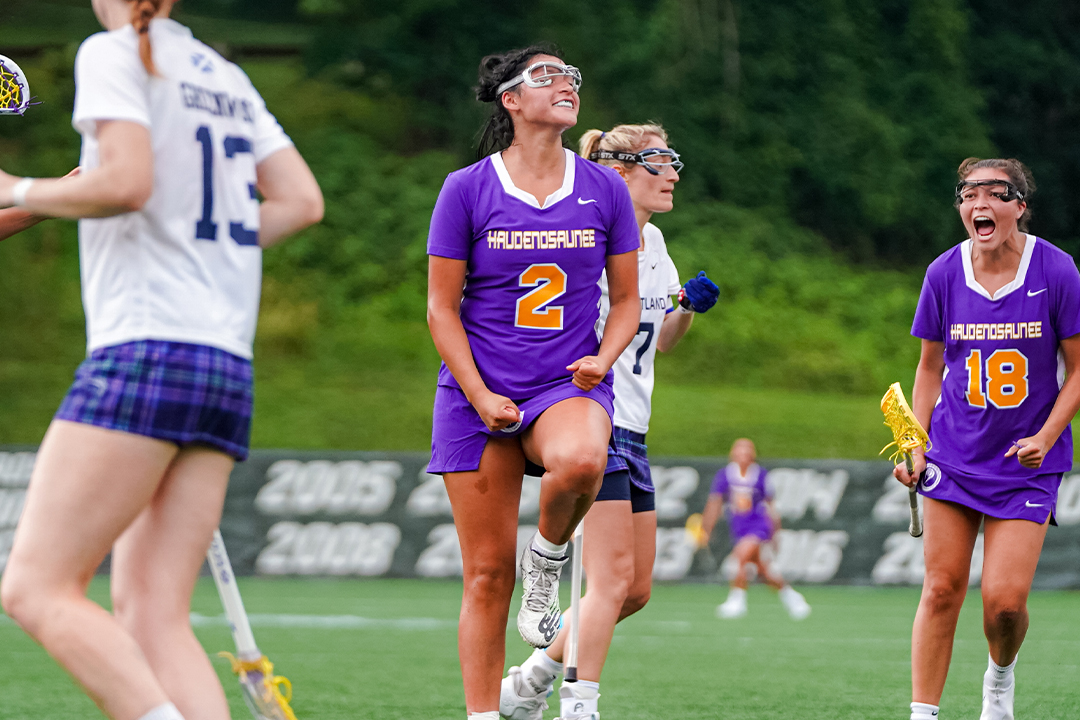 Miya Scanlan celebrates after scoring a goal against Scotland on Tuesday.

TOWSON, Maryland— The Haudenosaunee are reaching their peak at just the right time — and head coach Liz Beville couldn’t be more excited about it.

On Tuesday, the No. 12 seed in the Women’s World Lacrosse Championship edged past fifth seed Scotland 11-9 in the championship bracket, securing the team their first top eight finish since 2013. This year there, the Haudenosaunee finished seventh, the best in its history.

Could an even better finish arrive this week? The team’s next test is Wednesday at 2pm against No. 4 Australia in the quarter-finals.

Not one player has fueled the team’s rise, although there are certainly a few who deserve credit. Miya Scanlan received two Player of the Match awards, dominating as an offensive force and a powerhouse. Having just completed his freshman year at Jacksonville, Scanlan has impressed Beville with his development since the trial process.

Then there’s Paige Crandall, Beville’s varsity goaltender at Le Moyne, who has improved throughout the tournament. She made nine saves against Scotland, a day after making five in a win over Argentina.

“People are watching. Whether you’re a native or not, you support this team,” co-captain Lois Garlow said during a team meeting Tuesday night.

“The girls are really passionate and really want to play at a high level,” Beville said. “They understand what this game means to their people and to themselves, and they want to represent it at the highest level.”

Anna Lottmann had four goals, two assists and three draw checks and Anna Ničová claimed Player of the Match with 11 saves to lead the Czech Republic (10th) to a 14-9 win over Germany (7th). ).

“I don’t care about saves,” Ničová said through Lottmann, his interpreter. “It’s unbelievable that with this young team we have made history like this.”

The Czech attack was sharp. In a pivotal two-minute streak to end the second half, his attack scored three times – twice by Michaela Srchová (three goals, two assists) and once by Belle Martire (five goals) – to take a lead of 8-4.

Germany opened the third quarter with their own three-goal streak — Jenny Markey, Tessa Helf and Jule Neubauer were responsible for those goals — to cut it to 8-7 with 9:26 left in the period.

“The first time we did this was against Mexico two days ago,” Lottmann said. “Before, we were so eager to get to the goal because we haven’t played for so long and there are new faces in the team. It’s been two games since we did that, and it’s perfect. It’s us.”

Even on the other side of the pitch, Ničová could tell the attack was at its best. Did she know that was something her team was capable of?

“Of course,” Ničová, 34, said without hesitation.