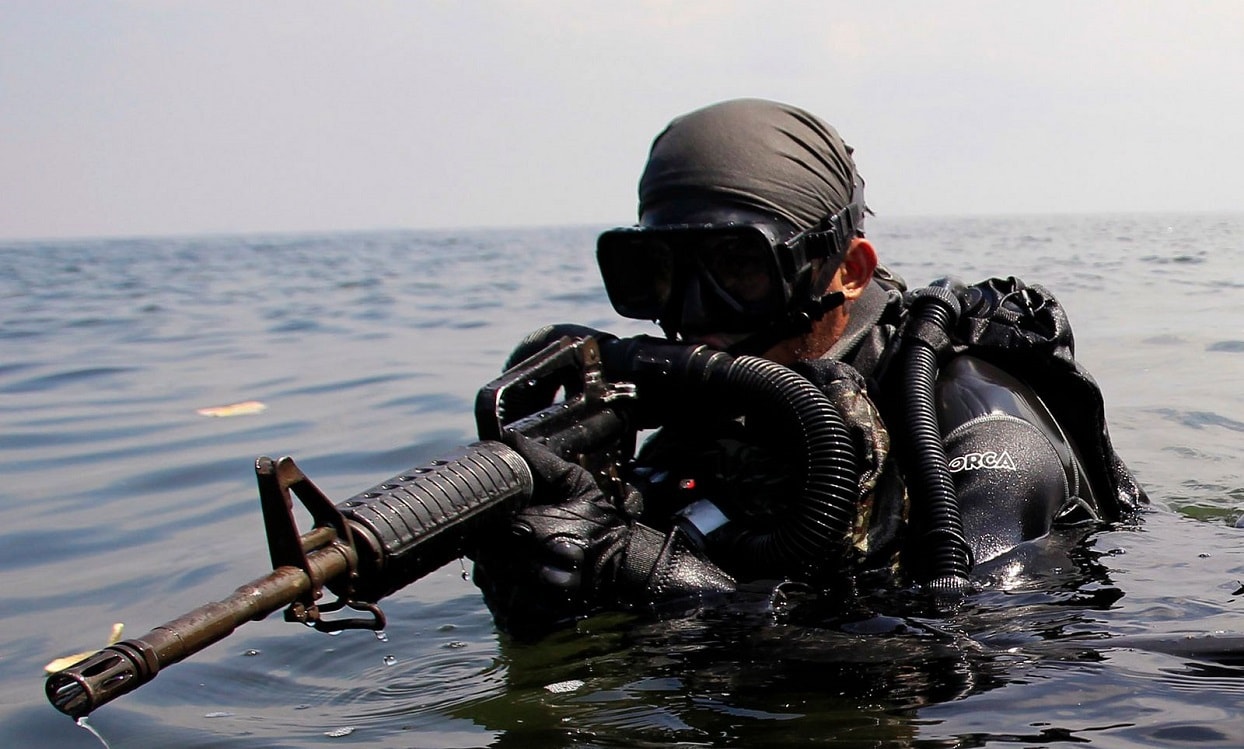 What exactly is SEAL Team Six? You’ve probably never heard of the US Navy Special Warfare Development Group. It looks like a Marine unit conducting mundane business away from the battlefield. But that couldn’t be further from the truth. The Special Warfare Development Group, called DEVGRU for short, is better known as SEAL Team Six, although the Joint Special Operations Command (JSOC) prefers to call it DEVGRU these days, and the Navy denies sometimes simply the existence of SEAL Team Six.

The Tier 1 unit is responsible for the murder of Osama bin Laden in 2011.

Like the U.S. Army’s Delta Force, DEVGRU is under the umbrella of JSOC, which coordinates special operations missions for counterterrorism and direct action to eliminate bad guys around the world. DEVGRU also works with the various covert CIA paramilitary groups such as the special activities division and the CIA special operations group.

The Iran hostage crisis of 1979 and the subsequent failed rescue attempt in 1980 by U.S. Special Operations was a watershed moment for the Navy SEALs. Navy Special Warfare learned of the disaster which killed eight American rescuers and resulted in the loss of two aircraft and no rescued hostages.

One of the lessons learned was the need for innovative leadership. The SEALs wanted a colorful, bold character with tons of imagination and cunning. His name was Richard Marcinko, and he would have the ultimate answer for the failed mission. Marcinko received two silver stars and four bronze stars for his service in Vietnam. SEAL Team Six was Marcinko’s baby.

At that time in 1980 there were only two SEAL teams, the ever clever Marcinko called it “Six” to fool the Soviets into thinking the Navy had more teams. Marcinko began selecting his personnel who would be able to operate undercover, speak foreign languages, and be highly trained experts in traditional SEAL duties.

The main mission was the fight against terrorism and the rescue of hostages. Marcinko wanted the best snipers in the SEAL community and he brought together 75 operators. Seal Team Six quickly became controversial for Navy brass due to its untraditional ways, rebellious culture, and tough partying. The Navy shut down the original Seal Team Six in 1987 and created DEVGRU in its place.

DEVGRU still has its reputation as the best of the best SEALs. Before being considered by DEVGRU, SEALs must prove their reputation with numerous deployments in Iraq, Afghanistan and around the world. DEVGRU operators tend to be older and more mature. They have a unique selection process that relies on word-of-mouth recommendations that send out the most physically, psychologically, and best sparring practitioners. They attend an extremely tough review board, and their backgrounds are checked with other SEALs to ensure they score high on their teamwork, and tactical and technical skills.

So, according to SOFREP, they go through what is called the “Green Team” phase of formation. Instructors follow each trainee in a way that goes beyond what every operator is used to.

Like DeltaForce, DEVGRU is down into squads and troops, which include assault, support and intelligence, including covert operations. The main mission is the fight against terrorism as well as reconnaissance and intelligence gathering to thwart acts of terror before they occur.

DEVGRU gets an “A”

My experience with DEVGRU is that I was teaching a university course on counter terrorism and a member of DEVGRU intelligence was enrolled in my course. I told him in advance that he should be the one teaching the class! Indeed, he wrote an article about a terrorist group in Africa that I had never heard of. I told him not to write about anything with classified material that might jeopardize his clearance and he apparently knew the band off the top of his head, and he said it was open source. So I learned a lot from this student. Needless to say, he got an “A” in the course.

Now as 1945 Defense and National Security Editor, Brent M. EastwoodPhD, is the author of Humans, Machines and Data: Future Trends in Warfare. He is an emerging threat expert and former US Army infantry officer. You can follow him on Twitter @BMEastwood.

With ambitious goals for the World Championship and the Olympics, the American team names its team of 98 riders