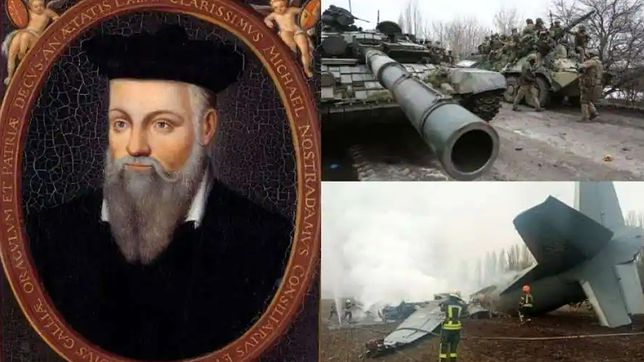 “Around the great city there will be soldiers lodged in the fields and the suburbs”, was one of the predictions of Nostradamus, and some underline this by referring to the current situation in the major European city of Kyiv, which has been besieged by Russian troops since President Vladimir Putin gave the order to invade Ukraine.

These prophecies are written in the book Les Prophéties, which was revealed in 1555, in Lyon, France. They are poems of four lines written in enigmatic terms intended to announce the events of the near future in France and throughout Europe.

Nostradamus said that his works were “books of prophecies that I wanted to refine a little darkly”. This dark and enigmatic tune to his predictions has seen him attract many supporters, who credit him with having accurately predicted many major world events. Academic sources are less convinced by the idea that Nostradamus had genuine supernatural prophetic abilities and argue that any connection is the result of misinterpretations or mistranslations (which were sometimes made deliberately). “Darkness” is, they say, a practical fuzziness that means the predictions could be applied to virtually anythingand are useless in determining whether their author had real prophetic powers.

Does that prevent us from appreciating them and relating them to the news? I do not think so! And certainly not as we recognize his last day on earth.

Apart from the war in Ukraine, predictions related to climate change are also something that has been taken into account lately.

“For 40 years the rainbow will not be seen; for 40 years, we will see it every day; the dry land will become more arid; and there will be great floods,” he surmised. In the first half of this year, India, Bangladesh, Brazil and China all suffered severe flooding. The most recent in Afghanistan left 400 dead.

“The sudden death of the first, will see a change and put another in his kingdom”, cannot yet be clearly attributed to any event this year. But keep your eyes and ears open for any opportunity to fill it. Others will.

“Like the sun, the head will seal the resplendent sea, the living fish of the Dead Sea will almost boil.” Although Nostradamus’ predictions were for the Dead Sea, many pointed to the relationship with Canada over the past year, which has seen such a situation with mussels, clams and shellfish being killed by temperatures reaching 50 degrees.

The high price of wheat

“Honey will cost much more than candle wax; the price of wheat is so high,” sees another Ukrainian link, with Putin’s unprovoked and illegal invasion in February affecting wheat prices around the world.