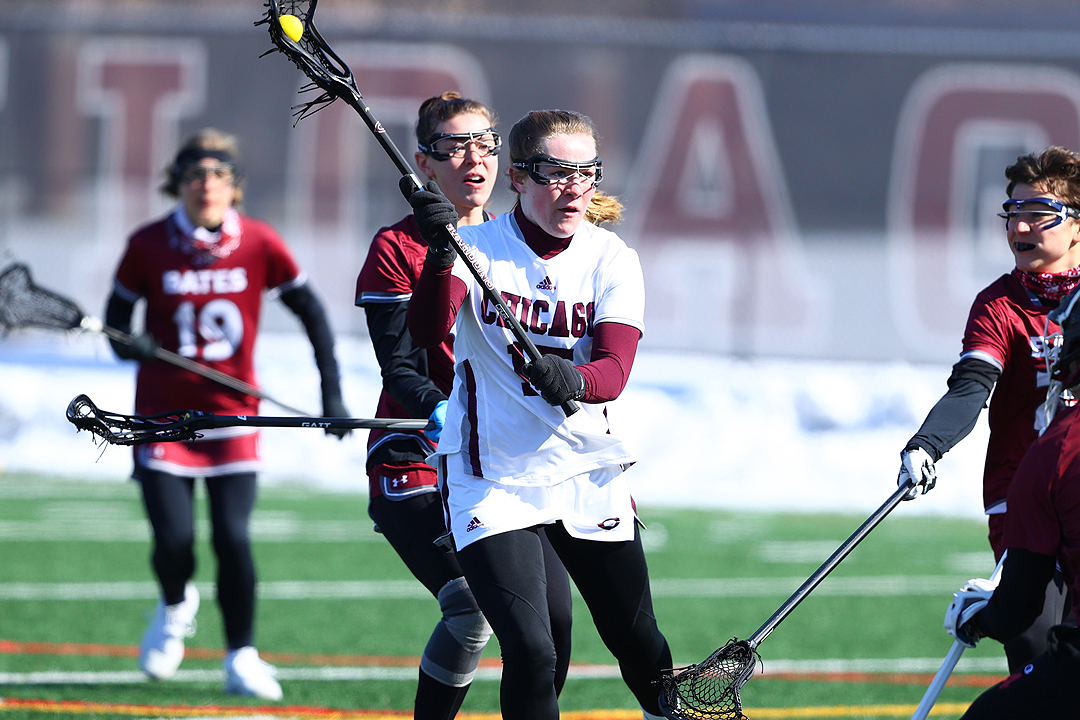 PHOTO COURTESY OF UNIVERSITY OF CHICAGO

Lulu Hardy scored the game-winning goal in overtime for the University of Chicago.

Top-ranked Salisbury added a second victory against a Top 20 opponent, Gettysburg moved up the rankings picking up a pair of wins in ranked competition and the Division III women’s lacrosse season is heating up early.

Defending national champion Sea Gulls claim the top of the standings to start the season with a 3-0 start that this week included a narrow win over former No. 3 Washington & Lee. Gettysburg entered the top five by beating No. 8 Messiah on Wednesday and No. 12 Denison on Saturday.

The Bullets took a 7-2 halftime lead against Messiah and cruised to a 17-7 win on Wednesday with Jordan Basso leading the attack with five goals and one assist. They continued their momentum on Saturday with a 14-7 win over last year’s NCAA semifinalist Denison. Katie Fullowan scored five goals and added four draw checks to lead Gettysburg, while Basso added four goals to take it to nine scores for the week.

Shannon Twill made 13 saves in goal against Messiah and only needed five to preserve the win over Denison.

Gettysburg finished 15th last year with a 7-1 record in a limited schedule.

The Sea Gulls edged out then-No. 3 Washington & Lee 7-6 on Saturday in a game that showed both teams are legitimate contenders this season.

Lily Cavallaro scored the game-winning goal with nine minutes left after the Generals rallied from a 6-4 deficit to tie the game early in the fourth quarter. The Salisbury defense closed out strong to hold the lead, and goaltender Mary Claire Hisle finished with seven saves.

The midweek 10-goal loss to Gettysburg sent the Falcons down the standings, though they rebounded with a 20-9 victory over Randolph-Macon on Saturday.

Messiah fell behind Gettysburg early and despite a better second half, the Falcons couldn’t slow down the Bullets offense enough to make a comeback. It was a different story against Randolph-Macon, as the Falcons scored nine goals in the first 18 minutes and added eight in the third quarter to seal the win. Hope Flack led the attack with six goals, Rachel Delate added four goals and two assists and Amanda Wadsworth had one goal and three assists.

The team has another chance to move up the rankings with a meeting against No. 5 Franklin & Marshall looming on Wednesday.

Denison’s seven-goal loss to Gettysburg cost him three places in the standings. Casey McTague scored twice in the first quarter to help the Big Reds take a 3-2 lead, but Gettysburg outscored them 5-1 in the second period to hold a halftime advantage and never lose momentum.

McTague and Jane Bailey each scored three goals to lead Denison, who bounced back Sunday with a 17-11 victory over Dickinson. The Big Red scored 11 goals in the last two quarters to take a lead after the teams entered the break tied at 6.

Lulu Hardy scored the game-winner four minutes into extra time to lift Chicago to an 8-7 win over Bates in their season opener, and that was enough to send the Maroons down the standings after a tournament berth. NCAA last year.

Chicago took a 6-3 lead in the third quarter, but Bates held the Maroons to one goal in the final 29 minutes of regulation time and made a comeback. The Bobcats scored the final two goals in the fourth to send the game into overtime.

Lally Johnson gave Hardy the ball to set up the winner and maintain an unbeaten streak at home since Chicago’s first season in 2019. Hardy and Ali Sheehy finished with three goals apiece to pace the offense, and Rachel Keefe finished with six saves in goal. .

The Red Hawks retired after opening with a 13-10 loss to Haverford College.

Graduate student Rhiannon Brown scored four goals, but it wasn’t enough as Haverford broke a tie at 9 in the fourth quarter with four straight goals for the game’s biggest lead. Montclair scored the final goal with 29 seconds left.