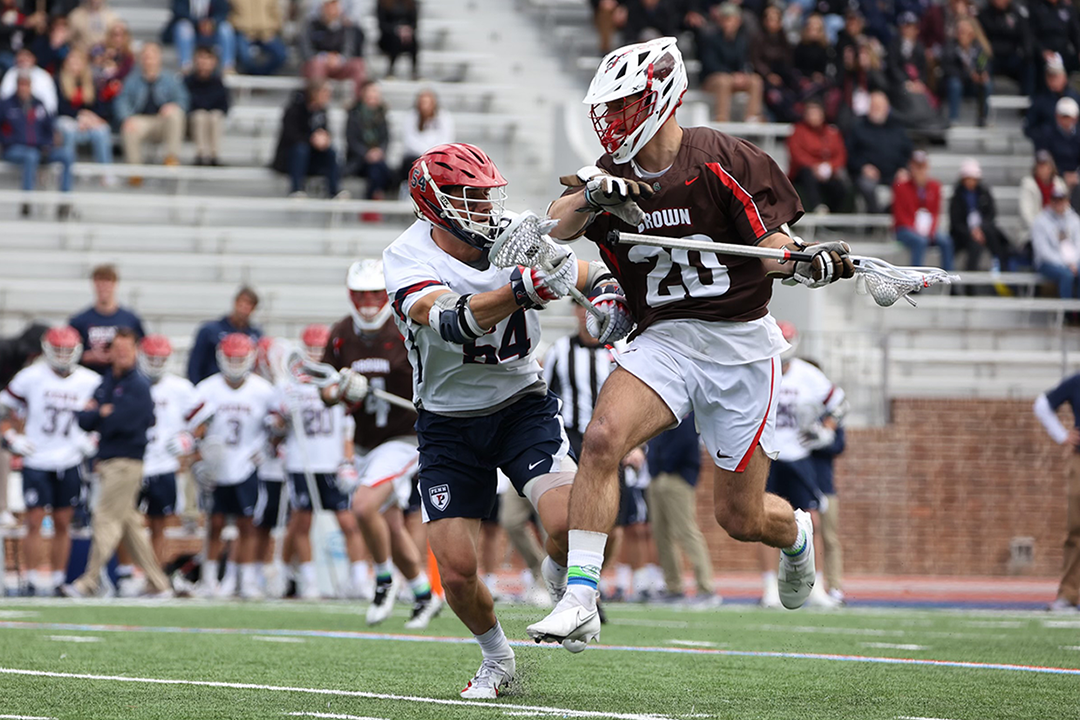 Reed Moshyedi had two goals and two assists as Brown came back from a five-goal deficit to upset No. 8 Penn, 12-10, Saturday at Franklin Field.

The Ivy League kicked off Saturday with five of the top 12 teams in the Nike/USA Lacrosse Rankings, but the depth of the league doesn’t stop there. Brown knocked out No. 8 Penn 12-10 at Franklin Field on Saturday to add more mayhem to the league standings.

The Ivy League is chaos. pic.twitter.com/Ymd1J8irm8

The Quakers took a 5-0 lead after the first quarter, but Brown scored seven times in the second quarter to tie the game at 7 at halftime.

With the game tied at 8 midway through the third quarter, Brown’s Devon McLane scored back-to-back goals to give the Bears the lead for good. McLane’s fourth goal of the game helped wrap things up. Trailing by one goal, Penn’s Sam Handley fired an outside shot that was blocked by Brown’s Trevor Yeboah-Kodie stick. Yeboah-Kodie picked up the ball on the ground to start a quick break opportunity and he fed McLane for the insurance goal.

A breakthrough season added another key milestone as Jacksonville defeated Southern Conference rival Richmond for the first time ever, beating the Spiders 13-11. Richmond, which has won or finished second every year since the SoCon began sponsoring men’s lacrosse in 2015, had won all eight previous meetings against Jacksonville.

You knew it was when @JohnGalloway15 turned the hat inside out. pic.twitter.com/2JfCuVNPb6

The Dolphins (10-2, 2-0 SoCon), who beat 2021 SoCon champion High Point last weekend, took a 13-6 lead late in the third quarter and needed that cushion after a sloppy end to the game. Jacksonville went scoreless in the final quarter while committing seven turnovers.

Tyler Corpora, a graduate transfer from Hartford, stepped up considerably for Jacksonville, scoring four goals. His fourth came with 43 seconds left in the third quarter to give the Dolphins a seven-goal cushion. Max Waldbaum and Ethan LaMond each scored twice for Jacksonville.

Notre Dame No. 15 led from start to finish in a 16-15 win over Duke, tying the Irish record at 4-4 while moving to 2-1 in the ACC. Duke was unable to build on the momentum of a blowout win over North Carolina last weekend, losing for the third time in the last five games to fall to 9-5, 1 -2.

Notre Dame led 7-3 after the first quarter, forcing the Blue Devils to catch up the rest of the way. Jake Naso’s goal with 5:44 left in the second quarter put Duke back 8-7, but the Irish scored three goals in the final four minutes of the first half.

Duke again reached a goal late in the third quarter, trailing 13-12 after an Owen Caputo goal capped a three-goal rally, but Notre Dame had a response again with Wheaton Jackoboice scoring with 10 seconds left in the quarter.

Notre Dame pushed the lead to three goals again in the third quarter before Duke closed the scoring on goals from Reed Landin (4:16) and Brennan O’Neill (0:08).

IRISH COMBAT FINISH @NDlacrosse gets Pat Kavanagh points down @DukeMLAX in a 16-15 thriller.

Pat Kavanagh led the Irish attack with seven points (3g, 4a) and Jackoboice also scored a hat trick. O’Neill and Nakeie Mongomery each had three goals and two assists for Duke.

With All-American forward Matt Moore sidelined, Virginia’s No. 5 offense was slow to get going, but the Cavaliers’ defense more than delivered in an 11-4 win over North Carolina No. 14.

Freshman Matt Nunes made 13 saves while allowing just four goals and the Cavaliers forced North Carolina to 17 turnovers. North Carolina led 2-1 after the first quarter, but only scored one goal in the final 37 minutes of the game.

Payton Cormier led Virginia (8-2, 4-0 ACC) with four goals, including back-to-back tallies in the final 2:26 of the first half to help give the Cavaliers momentum and a 6- 3 at halftime. Griffin Schutz and Evan Zinn each scored twice for Virginia, and Jeff Conner had one goal and three assists.

Jackson Reid did it every which way, scoring five goals in No. 11 Ohio State’s 12-10 game against Johns Hopkins at Ohio Stadium.

Reid had a no-look goal, grabbed a rebound in front of the net for a second-chance goal and intercepted a punt pass which he turned into an empty-net goal to hit the Buckeyes (8-3, 2 -1 B1G).

Find out how Jackson Reid scored his hat trick in the first half!#GoBucks pic.twitter.com/5iunFMACNn

The final goal came in the opening moments of the fourth quarter to tie the game after the Blue Jays took a 9-8 lead on Ryan Evans’ goal in the final minute of the third quarter. Ohio State took advantage of another broken play to take the lead for good when Reid found Scott White for an open look after a Hopkins defender had to leave the field with a broken stick.

Jack Myers had a goal and four assists for the Buckeyes and Johnny Wiseman and Connor Mitchell each scored twice.

No. 12 Harvard’s seven-game winning streak ended with a thud in a 17-9 loss to No. 6 Cornell. The Big Red led 10-1 early in the second half and remained in control except for a four-goal push at Harvard midway through the third quarter.

John Piatelli led Cornell with four goals and CJ Kirst had three goals and three assists. The Big Red also got strong efforts from Angelo Petrakis with 17 of 27 game wins and Chayse Ierlan with 10 saves.

The 17 goals allowed tied the season high allowed by Harvard, which lost 17-12 to Ohio State in its season opener.

Jack Hannah scored three goals and Jack Thompson made 15 saves as No. 20 Denver earned its third victory in its last four games, edging out No. 19 Villanova 12-10.

Neither team trailed by more than two goals in the close battle. Back-to-back goals from Noah Manning and Ellis Geis in the final 81 seconds of the third quarter gave Denver a 10-8 lead early in the final quarter.

Villanova’s JP Basile scored with 1:10 left in the game to bring the Wildcats within a goal, but Denver faceoff specialist Alec Stahakis scored just 16 seconds later to seal the victory .

Alec Stathakis ran a marathon to get to the cage.

BUT HE ARRIVED AT THE CAGE.

How the Nike/USA Lacrosse Top 20 fared