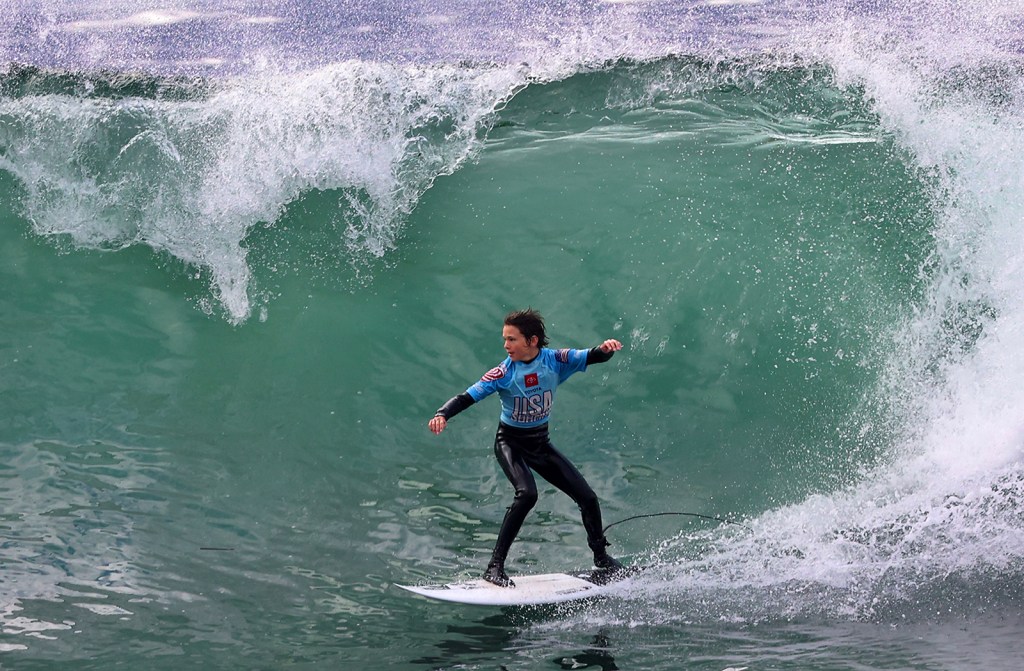 SANTA CRUZ — It literally rained on the Max St. Denis parade on Monday morning. Him, but he was still a happy little grinder.

St. Denis, 13, an eighth grader at Aptos Junior High, was about to upset three other accomplished surfers in the men’s U14 final at the USA Surfing Prime Steamer Lane event. He led with two minutes left in the 20-minute final. But, with a light rain falling, a few solid sets came in and St. Denis didn’t get wave priority.

Saint-Denis did not lower his head. It’s surfing.

“The goal was to do a few runs,” said St. Denis, after winning her semifinal with a total of 12.50. “I didn’t expect to reach the final, but of course I wanted to. I’m super happy to have succeeded there.

Romaniuk finished with a two-wave score of 12.36 for the win. Senkbeil-Cassity scored 12.03 for second place. St. Denis (8.57) was third and Quaid Fahrion of Huntington Beach, also a member of the Youth Olympic Development Team, was fourth at 5.84.

“I just had a bad game and the other guy (Senkbeil-Cassity) got a good score,” St. Denis said, noting he’ll be riding a wave of confidence in future competitions. “Even if I didn’t win, I have the ability.”

Romaniuk put himself in the right place at the right time.

“With 10 seconds remaining a bomb came and I got it, and I got the score,” he said of his win. “I’m super happy. I came this far to win, so I’m delighted.

The Steamer Lane competition is one of six on the USA Surfing Prime season schedule. The surfers will count their first four results in the race for the title of the season.

The next event is scheduled for January 29-30 at Howard Futch Beach Park in Melbourne Beach, Florida. The action returns to the West Coast on February 12-13 for an event at Huntington Beach Pier.

St. Denis was the only local to reach the final. USA Surfing Youth Olympic Development Team member Adam Bartlett of Santa Cruz and St. Denis were ousted in the men’s U16 semifinals. Aptos’ Kainoa Queenan and Santa Cruz’s Brody Price were eliminated in the boys under-14 semi-finals.

Price said he was nervous after spotting an elephant seal in the lineup during his semifinal.

“It just got everybody out of their heads, just really scared of the elephant seal,” Price said. “The seal was bigger than the waves there. It was huge. … I love sea life, but when I was sitting there, like a stick touched me and I was like, ‘Oh, no!’ ”

Price, 13, took an early lead in her semi-final but two other competitors posted slightly higher scores before conditions temporarily eased.

“You don’t win them all,” said Price, who won the Open Mini Groms final at the National Scholastic Surfing Association national championships in November. “It’s just practice to learn more. Also, it’s an older division for me.

Waves were in the 4-5 foot range for most of the finals, which created airy conditions for some of the younger entrants.

Two surfers, Talia Swindal of Malibu and Kai Kushner of Manhattan Beach, reached the final in two events. Swindal won the U16 girls’ title with a total of 11.23 and finished second in the girls’ 18 final with a total of 11.66, finishing behind Lilie Kulber of Los Angeles (12.26).

Half Moon Bay’s Zoe Chait (8.50) took second place behind Swindal in the U16 final. Chait was in the lead, but dropped to second after being penalized for priority interference.

The competition came to a rare end on Monday due to a tsunami that hit the coast on Saturday, forcing the postponement of the first day of competition. The action started and peaked on Sunday with 8-10 foot waves. There was still debris floating in the lineup on Monday, including driftwood.