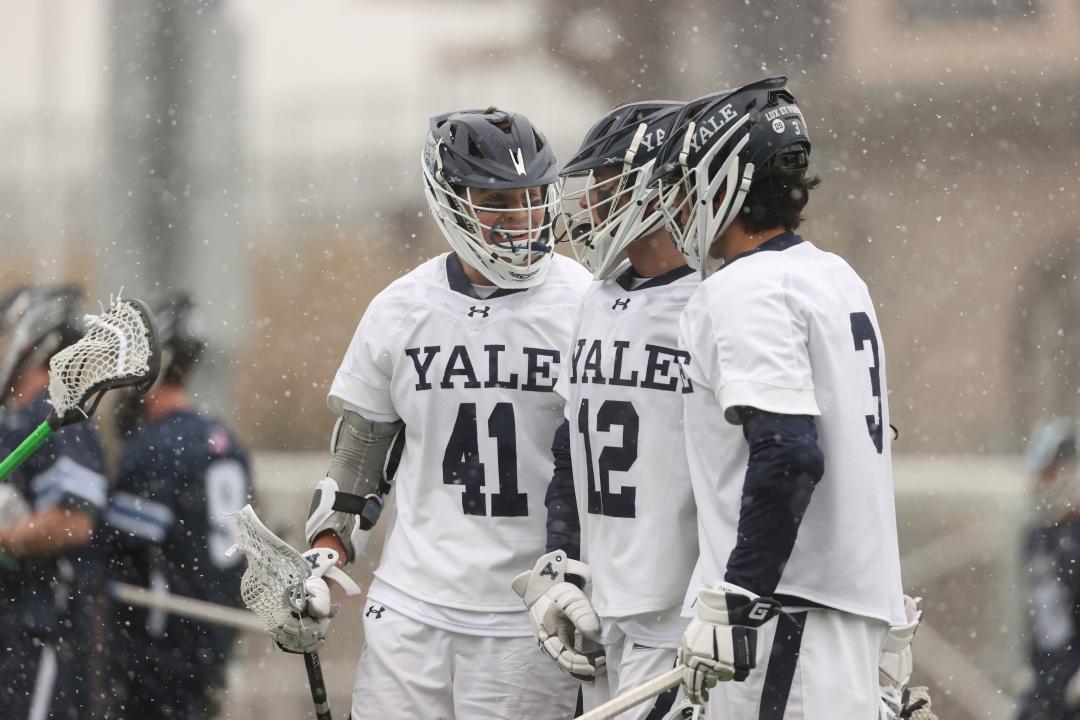 Yale picked up a 17-14 victory over Villanova in its first game since March 2020.

The men and women of the Ivy League finally returned to the field on Saturday. For most, it was their first game since March 2020. While a few teams had the chance to play a game or two in 2021, for all intents and purposes, Saturday represented the league’s triumphant return.

Let’s recap and celebrate the results.

Penn, number 8, wasted no time in challenging himself after almost two years out of Division I lacrosse. The Quakers squeezed in a season-ending game with Cabrini in 2021, but nothing could quite prepare them for No. 3 Georgetown on Saturday afternoon in Philadelphia.

Behind a strong first quarter, Georgetown held off a constant barrage from Penn to win 10-8. Graham Bundy Jr., Connor Morin and Dylan Watson each scored twice in another big win for Georgetown.

Face-off man James Reilly scored a coast-to-coast goal to make it 2-2 early, part of a Georgetown four-goal streak that made it 5 -2 at the end of the first quarter. Bundy scored twice in the quarter to help the visitors lead 6-4 at halftime.

Watson opened the third quarter with two straight goals, giving Georgetown its biggest lead of the game. Sam Handley, the 2019 freshman phenom who entered 2022 with high hopes, scored his first goal in the third quarter, followed by a goal from Dylan Gergar to cut the deficit to two goals.

Gergar continued his hot streak with consecutive goals separated by 12 minutes to make it 9-8 with 2:33 to go. Reilly won the ensuing faceoff and Morin scored less than a minute later to seal the victory.

The last time Brown played a significant game was March 11, 2020. It was a proud moment for the program, as he knocked out an ACC team at Virginia Tech that had been deemed Top 20. .

Brown made his long-awaited comeback against Bryant and held off a fourth-quarter flurry from the Bulldogs for a 14-11 victory.

Leading 12-5 after Claire Jeschke fed Maggie Fowler for a goal with 12:01 to go, Brown then saw Bryant score four straight to come with two goals. The teams traded counts from there, with Alaina Parisella delivering the knockout blow to the back of the net with 2:05 remaining.

YALE MEN WALKING AWAY FROM VILLANOVA

No. 6 Yale returned to the field for the first time since March 2020, and he welcomed a familiar foe to an upset Villanova. Although the Wildcats put the Bulldogs to the test, Andy Shay’s team still had plenty of energy in snowy New Haven.

Matt Brandau came within five goals and rookie Leo Johnson recorded a hat trick to lead Yale to a 17-14 win at Reese Stadium. Jared Paquette added nine saves in his first game as a Yale starter.

Yale started the game on a strong streak, scoring six goals in the first quarter. Johnson and Brandau each had two goals to get the Bulldogs forward early, but Villanova responded soon after. Brett Baskin led a four-goal streak for the Wildcats in the second quarter to go tied 6-6, creating a home-and-away game that extended well into the second half.

Neither team was leading by more than a goal until Jack Monfort gave Yale a 10-8 lead with 10:33 left in the third quarter. After Villanova responded with a Patrick Daly goal, Yale scored six straight goals to pull away. The Wildcats scored the last three goals of the game, but it was too late to make a comeback.

A MASSIVE VICTORY FOR COLOMBIA

It was a spirited win for the Lions, who trailed 7-5 when Grace Lipponer scored with 9:01 left in the second quarter. This would also be the final score of the half.

All Columbia did was come out and kick a second-half shutout, scoring eight unanswered goals to come away with a win. Rachel Graff led with three goals, although Katie Lutz, Sydney Paoletti and Dani Falcone each scored two goals. Simone Koryszewski made 12 saves.

Connor Buczek waited a long time to make his coaching debut for Cornell. One of the youngest coaches in Division I lacrosse, Buczek had been preparing his team for this weekend’s game against Albany for what felt like years.

If Saturday’s offensive production was any indication, Cornell was ready for the moment.

The Big Red got four goals from Aiden Blake to take a big lead and claim a 16-8 victory. CJ Kirst, brother of Connor, Colin and Cole, dropped seven points in his first college game.

Kirst scored twice in the first quarter, helping the Big Red take a 7-3 lead in the second. Graydon Hogg and Keelan Seneca helped lead a run from Albany to cut the deficit to 8-6 at halftime. After Seneca scored in the third quarter to make it 9-7, Cornell responded with seven straight goals to put the game away.

A big first quarter and an overall strong first half was enough for Cornell to hold off Villanova in the second half of a 14-9 win at Villanova Stadium. It’s the Big Red’s first victory in 713 days.

Cornell led 6-1 after the first quarter and 10-3 at halftime, a solid first 30 minutes considering the team’s time in meaningful games.

Villanova started the second half on a 3-0 run, but Cornell responded with a 3-0 run to quell any thoughts of a breakdown.

The last time we saw Princeton enter the field, a talented forward X named Michael Sowers led a high-powered attack. In two years, a lot has changed for the Tigers, but their return to the field proved they could recharge.

Slusher did much of his work in the first half, scoring four goals to power a 10-5 halftime lead. Princeton extended the lead with a nine-goal third quarter.