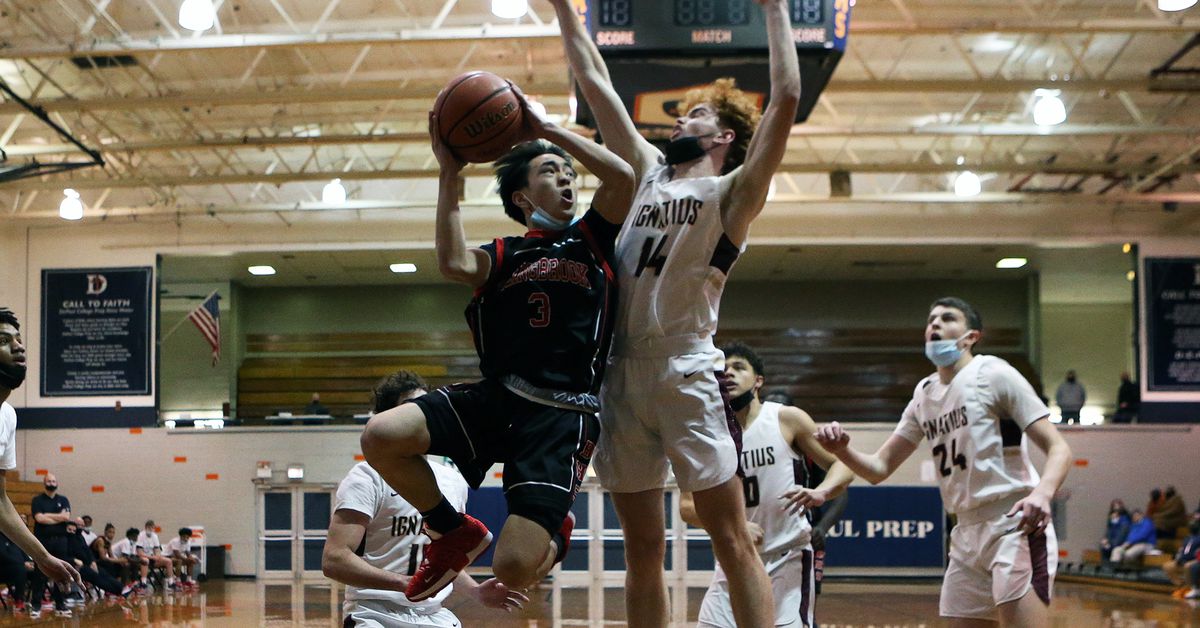 DePaul Prep knows how to set up a shootout. Everything went about on time, there was wifi and lists you don’t have to beg for and a nice table to sit on. I could spend the whole season sitting on the balcony watching basketball. Well done Pat Mahoney and Tom Kleinschmidt.

The basketball was pretty good. Highlights below and there’s a full story on St. Ignatius beating Bolingbrook. The Wolfpack looked pretty good playing fast at the start of this one. Bolingbrook is speeding everyone up and St. Ignace handled it really well.

After driving home through the ice, I watched Kenwood take on Christian Brothers, a team from St. Louis, at the Highland Shootout. The Broncos took a big lead early behind some big plays from guard Darrin Ames, who is back from injury.

Christian Brothers has a really intriguing sophomore, 7-2 John Bol. Kenwood dominated most of the first half and led in the fourth quarter, but ended up losing 73-69. It’s a win the Broncos should have been able to finish. The techniques and some really reckless decisions cost them a victory.

Ames finished with 21 points and Trey Pettigrew scored 17. Bol had 14 for CBC and Robert Martin led them with 26.

Glenbard West 60, Benet 45: The Hilltoppers are going about business in the final game of the DePaul Prep shootout. Caden Pierce had 17 and Bobby Durkin added 15. Braden Huff had 11. Senior grand Kyle Thomas led the Redwings with 16 points.

DePaul Prep 45, Homewood-Flossmoor 35: Vikings fans are going to start bribing me to leave the gym before their team plays. HF always falls flat when I watch. The Rams were in control from start to finish in this one. Dylan Arnett was very aggressive and senior goaltender Julian Green had a great time for DePaul Prep.

Loyola 55, Saint-Patrick 53: I watched the fourth quarter of it. The Shamrocks led early but Loyola took the lead on a three from junior Alex Engro with 2:26 left. St. Patrick’s senior Brandon Adorno scored with nine seconds left, but runner-up Miles Boland was 3-4 from the free throw line in the final 18 seconds to seal the Ramblers victory.

Peoria Notre Dame 50, Sainte Rita 38: Did everyone expect too much from a busy sophomore team? May be. I received a few texts after this one. I guess I’m not as worried as everyone else. How beautiful Mustangs looked in late February and March was always going to be more important than now. They lost by 12 against a good team. Kaiden Space scored 14 and Illinois rookie Morez Johnson had 11.

York 65, Sandburg 44: The Dukes won on the road behind a big effort from Drew Kircher. The senior scored 31. James White led Sandburg with 17 points.

Morgan Park 56, St. Viator 47: The Mustangs have moved away from the spotlight since Nick Irvin left, but they’ve been a tough game for the opposition this season. Big man Lidell Miller had 20 points and 16 rebounds and star quarterback Aaron Warren added nine points. They improve to 5-5.

Hyde Park 84, Professional 59: Another great victory for the Thunderbirds. No disappointment after a quick turnaround with an early afternoon game after winning at Riverside-Brookfield last night. Malik Jenkins scored 15 points and Cam Williford added 14 points. Damarion Morris contributed 11 points and six assists. The Thunderbirds are 11-3 and have won seven straight games. LaShawn Pollard continued his senior season with 35 points and eight rebounds for the Cavaliers.

Saint-Louis Chaminade 103, Yorkville Christian 59: A tough one for the Mustangs at the Highland Shootout. Duke rookie Jaden Schutt led Yorkville with 22 points.

Lake Forest Academy 67, Proviso East 65: I never know what to do with LFA. They usually play a lot of local teams, but they’re not in the IHSA playoffs so it’s easy to overlook them. They now have two different teams appearing in the standings and I don’t know what it is. Either way, they took out the Pirates today. Simon Weisserman, a 6-7 junior, led the Caxys with 23 points and 15 rebounds.

Lindblom 49, Palatine 43: What a solid victory for the Eagles, beating a good Mid-Suburban League side. Senior Zachary Royser had 14 points, 10 rebounds and six blocks. Sophomore Je’Shawn Stevenson scored 17 and Reggie King senior had 9 points and 10 rebounds. Lindblom is 11-3.

The Blacklist, Drag Race, SEAL Team, This Is Us and more