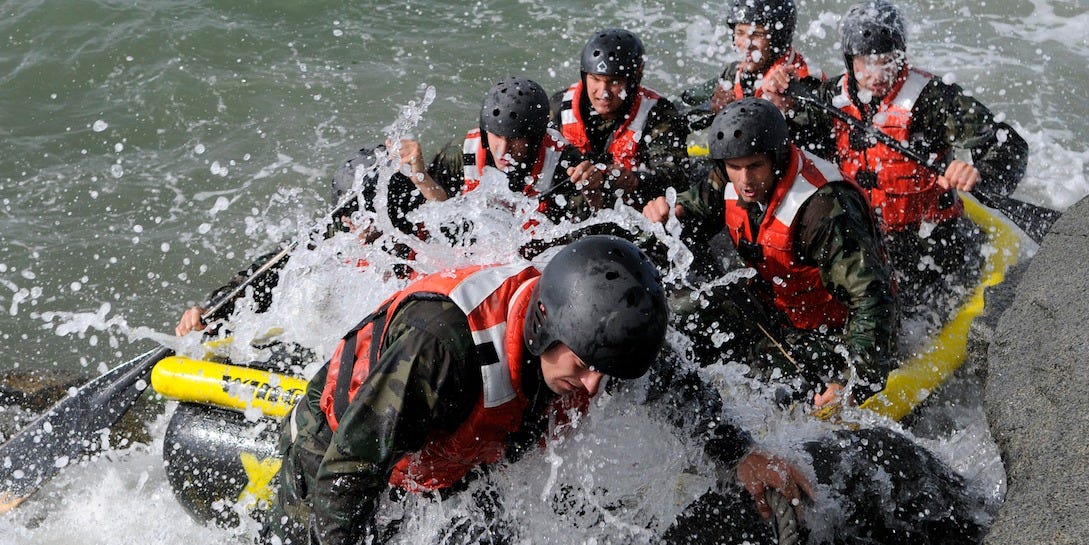 After experiencing his own Hell Week a few years before, Leif Babin found himself leading a new generation of US Navy SEAL candidates through their own struggles on a cold Southern California night in 2008.

Since returning from his duties as Platoon Commander in the Battle of Ramadi in Iraq in 2006, he became a Junior SEAL Officer Training Instructor the following year and would also take Hell Week shifts.

The class he was observing had started Basic Underwater Demolition / SEAL (BUD / S) training several weeks previously with around 200 candidates; after the first two of the five and a half days of Hell Week, about half have quit. According to SOFREP, only about 25% of the candidates pass the intense physical and mental endurance tests of the week.

As Babin writes in his book “Extreme Ownership: How US Navy SEALs Lead and Win“, co-authored with his former commander and current business partner Jocko Willink, the candidates were about to learn that night perhaps. be BUD / S’s deepest lesson: “There are no bad teams, only bad leaders. “

The SEAL candidates were grouped by size into crews of seven and assigned to a World War II relic inflatable boat that weighed over 200 pounds. The most senior sailor became the ship’s crew chief responsible for receiving, transmitting and overseeing the execution of the chief instructor’s orders.

In one exercise, the instructors involved the teams in a constant series of boat races, requiring the teams to carry their boats on top of their heads to shore, paddle the boat to a specific marker, to stand throw out of the boat and come back, and follow a path to the end point back on land.

Babin and the most experienced instructor present, whom Babin calls the Senior Leader, kept their eyes on the leader of Boat Crew VI, an inexperienced officer who lost his temper with every race. His behavior was unacceptable to a SEAL.

Before the start of a race, Senior Chief announced that the leaders of Boat Crews II and VI would exchange their teams. Babin says he saw how elated the struggling team leader seemed as his boss seemed to turn frustration into resolve.

During the next hour of racing, Boat Crew II performed well but never finished first; Boat Crew VI has won almost every race.

“No more swearing and frustration,” writes Babin of Boat Crew VI. “And the constant scrutiny and one-on-one attention that they had received from the SEAL instructor staff is also gone. If I hadn’t witnessed this incredible transformation, I might have doubted it. “

It was a perfect example of training in the principle of “extreme ownership”, which Willink taught him as the commander of Task Force Bruiser when they were deployed to Ramadi. It’s the simple idea that all the responsibility for any success or failure ultimately rests with a leader.

Babin has taught the history of boat crew racing to the companies he works with through his leadership consulting firm and that of Willink. Front step. Babin explains the lesson of the story in more detail:

When Boat Crew VI failed under their original leader, that leader didn’t seem to think it was possible for them to perform better, and he certainly didn’t think they could win.

This negative attitude infected the entire crew of his boat. As is often the case with struggling teams, the original leader of Boat Crew VI almost certainly justified his team’s poor performance with a number of excuses … performance … [T]he leader and each member of Boat Crew VI did not focus on the mission but on themselves, their own exhaustion, their misery and their individual pain and suffering.

When the leader of Boat Crew II took over Boat Crew VI …[h]We didn’t wait for the others to solve his crew’s problems. His realistic assessment, his failure and ownership of the problem were the key to developing a plan to improve performance and ultimately win. Most important of all, he believed that winning was possible … Rather than tolerate their internal bickering and bickering, he brought the team together and focused their collective efforts on the one specific goal of winning the race.

He adds that the repeat of the success of Boat Crew II allowed him to put together an effective system of teamwork that gave him a fighting chance, even though his new leader poorly coordinated and communicated his plan.

By the way, the fact that his team changed and are still suffering under his leadership gave the ineffective SEAL candidate a valuable lesson, and he adopted it quickly enough to survive Hell Week and become a SEAL.

It all comes down, writes Babin, to “whether or not your team succeeds or fails, it’s up to you.”

How to Align Your Team, According to a Former Navy SEAL Officer