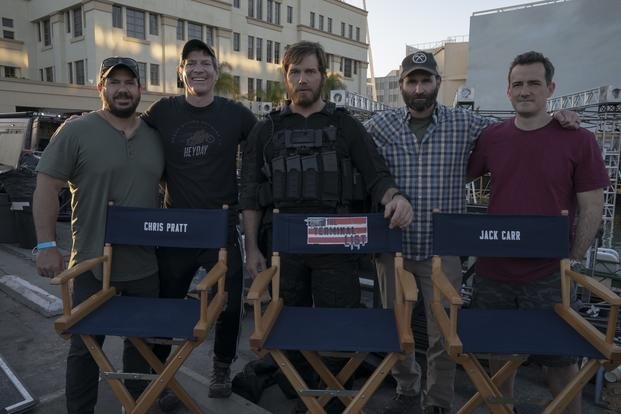 “The Terminal List” is an upcoming streaming series based on the novel by former Navy SEAL Jack Carr. The show stars Chris Pratt as his tortured hero, Navy SEAL James Reece, and follows the Operator’s quest for justice after his team is wiped out on a mission.

We’ve got an exclusive first look at the real-life veterans who joined Carr to do the show in hopes of delivering as faithful a story as possible. “The Terminal List” will stream on Prime Video starting July 1.

The Amazon-owned service has just released its first trailer for the show, and the footage suggests the producers understand what makes the books so great and have been trying to bring it to the screen.

We learn that Reece’s team has been wiped out in an operation as we hear Ozzy Osbourne sing the classic Black Sabbath song “War Pigs.” For anyone who hasn’t read the novels yet, the clip gives the impression that Reece is on a mission for justice and revenge, but doesn’t reveal exactly who his targets will be. We end with an iconic silhouette of Reece and his favorite weapon, a Winkler Sayoc tomahawk.

Reece and his creator Carr have enjoyed what seems like an enchanted existence since the publication of the first novel just four years ago. “The Terminal List” was almost immediately picked by a team that included future series star Chris Pratt and legendary action director Antoine Fuqua (“Training Day,” “Olympus Has Fallen”).

Carr has published a new novel every year since, with the fifth chapter of Reece’s story, “In the Blood”, coming out in May 2022. The books are getting more and more popular, and the timing couldn’t be better for a television series based on Reece.

We have photos from the production that tell an interesting story. Let’s start with a group photo. There’s so much information in this next photo that we couldn’t fit it all into a caption.

The producers of “The Terminal List” put together this class photo so we can see all the real and fictional operators in one image. We have seven former SEALs, an Air Force vet, a Navy vet, a Guardian of the Galaxy, three stunt performers, a movie dog, and the eldest son of one of our greatest action heroes from cinema, a young actor who also happens to be the brother-in-law of the Guardian of the Galaxy.

That’s a lot of operator testosterone in a single photo, as evidenced by their thick, lush facial hair. Here’s the breakdown from “The Terminal List” team:

Back, left to right)

We spoke with series executive producer David DiGilio, and he told an amazing story about how quickly this show came together.

“I think it really starts with former Navy SEAL Jared Shaw,” DiGilio said. “Jared had worked with Chris on ‘Zero Dark Thirty’ and he also knew Jack through the teams. When Jack wrote his first book, Jared immediately put it in the hands of Chris Pratt, who then began to pursue him. .”

“While Chris was researching the rights,” DiGilio continued, “he discovered that Antoine Fuqua had also received the book from one of his Navy SEAL buddies, and Antoine was pursuing those rights simultaneously. The guys decided to team up to form their first team since the movie “Magnificent Seven”. Early in their conversations, they realized there was such a big character here, such big conspiracies, and such a great story that it actually needed more than a two-hour movie, so they decided to make it a TV series.”

“When we moved into the writers room, I made sure to have military veteran writers in the room,” DiGilio said. “Special hats off to Max Adams who is a former Army Ranger, current writer and producer. don’t think I have the right to use his name in interviews, so we should say redacted, I guess.”

“Then Jared Shaw, who had been so instrumental in the beginning and in the design phase, came back with a bang,” DiGilio continued. “Jared helped us find Ray Mendoza, who’s an ex-SEAL and an amazing tech advisor who’s worked on huge movies like ‘Lone Survivor’.”

“On the stunt side, we had Keith Wulard, who is also a former Navy SEAL, who became our stunt coordinator for the show,” DiGilio said. “Besides behind-the-scenes talent, we also had a mandate to hire as many actors as possible with military backgrounds.”

“At the end of the day,” he continued, “there were over 25 actors with military backgrounds on the show, including most of Alpha Platoon, who you meet in episode one. Then, In Episode Six, we have the FBI Hostage Rescue Team chasing James Reece, and I think everyone in HRT has military training as well.”

One thing that makes “The Terminal List” novel so exciting is the fact that it is a totally made up story. Reece’s quest for justice has no real real-world consequences, so readers (and soon viewers) can embrace the intensity without tying those emotions to real battles or real sacrifices.

That doesn’t mean Carr hasn’t worked very hard to pay tribute to the skills the operators have mastered or the intense psychological ordeals they must endure. He just presented this tribute as a fictional tale that allows an operator to pursue his impulses and loyalty unfettered.

There will be plenty more to discuss as we approach the July release of “The Terminal List.” Be ready.